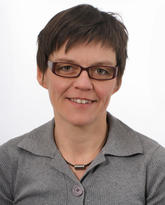 Prion diseases are infectious and strictly fatal neurodegenerative disorders of humans and animals.  They include Creutzfeldt-Jakob disease (CJD) and variant CJD (vCJD) in humans, scrapie in sheep, bovine spongiform encephalopathy (BSE) and chronic wasting disease (CWD) of cervids. The infectious agent is composed of an aberrantly folded isoform of the cellular prion protein PrPc, denominated PrPSc. Upon infection, prions propagate in an autocatalytic process which requires direct interaction between the PrP isoforms.
We use cell culture and mouse models of prion infection to study the molecular and cellular biology of prion diseases, to establish new classes of anti-prion compounds and to elucidate the molecular basis of their effects. We have established combinatorial peptide aptamers (PAs) as a novel class of anti-prion compounds, which will be improved to make them applicable for interference with prion conversion in vivo. In addition, PrP-derived peptide aptamers will be used to characterize the PrPc-PrPSc binding interface and to determine possible strain differences thereof. Second, we will investigate host cell responses to prion infection. Based on our previous finding that prion infected cells upregulate cholesterol biosynthesis, we will now focus on the effects of prion infection on cellular cholesterol metabolism and on the consequences thereof, such as alterations in endocytic vesicle trafficking. In a third project, the biochemical and biological properties of CWD prions, e.g. their composition of different molecular weight PrPSc aggregates, infectivity and transcytosis ability of those, and a possible relationship with the remarkable shedding ability of CWD prions will be investigated.

In summary, we will improve existing anti-prion compounds. By studying host cell responses to prion infection or mechanisms of prion shedding we will elucidate novel targets for intervention with prion propagation and add new knowledge about pathogenesis of prion diseases. The newly identified mechanisms and targets might also be of relevance for related neurodegenerative diseases such as Alzheimer’s disease.