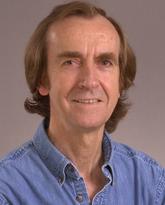 Structure, function and pharmacology of voltage-gated ion channels. Among proteins, ion channels offer the unique opportunity to observe, in real time, the kinetics of conformational (gating) transitions and drug interactions of a single molecule. My laboratory uses recording by patch clamp, or from single channels reconstituted into lipid bylayers, to study gating and ion conduction processes, and drug interactions of ion channels. Molecular biological and biochemical methods are used to relate functional observations to channel structure.

µ-Conotoxins are small peptides from Conus snail venoms which are potent blockers of voltage-gated sodium channels. They typically have three disulphide bonds, which constrain their structure, making them useful probes of the channel receptors to which they bind. Variants of these toxins, in which individual amino acids have been substituted, are used, along with channels containing complementary amino acid substitutions, to map relationships between functionally important parts of the channel protein. Recently,  µ-Conotoxins which specifically target the sodium channels of neurons in pain-signaling pathways. Following systemic administration, these peptides act as analgesics, and an understanding of their interactions with sodium channels may, in future, provide the basis for design of even more effective and specifically targeted peptide-mimetic drugs to combat pain.

A second broad theme in my laboratory is the role of ion channels in metabolic regulation and the response to stress. ATP-sensitive potassium channels are present in the brain and a variety of other tissues where they provide a unique functional link between a cell's metabolic state and its electrical excitability. The enigmatic mitochondrial permeability transition pore, mPTP, forms a strategic link in n pathways that determine cell fate in the face of metabolic stress. We have completed recent studies in both of these areas. Currently, we are examining the role of voltage-gated potassium channels in the regulation of insulin release and the regulation of glucose levels.