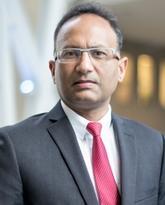 Mayank Goyal is a Professor in the Department of Radiology and Clinical Neurosciences at the University of Calgary. He is the Director of Imaging and Endovascular treatment at the Calgary Stroke Program. Dr. Goyal’s passion and main research interest is acute stroke imaging, workflow and intervention. He has over 200 publications in peer-reviewed journals. He was one of the Principal Investigators in two global multi-centric trials in the field: ESCAPE and SWIFT PRIME (both published in NEJM). He was also the core-lab for the REVASCAT trial (published in NEJM). He is also the Co-PI of a CIHR funded study called PROVE IT. Dr. Goyal is world renowned for his ground-breaking work in efficiency and workflow in acute stroke intervention. He has extensively traveled across the world as a consequence of this expertise and has been one of the key components that helped the Calgary Stroke Program in becoming one of the best acute stroke programs in the world.

In addition, Mayank is an innovator and is always thinking of solutions to problems. He also came up with a new way of imaging in acute stroke called multiphase CT angiography. This technique subsequently became the basis for the PROVE IT study (which is study doing a head to head comparison between multiphase CTA and CT perfusion) and was implemented globally as part of the ESCAPE study. Initial results and feedback suggest that the technique is extremely useful and saves on average 20 minutes in acute stroke treatment (published in Radiology). With the success of ESCAPE and SWIFT PRIME, Dr. Goyal has been an integral part of changing stroke care across the world and helping thousands of patients have a good outcome from what is otherwise a devastating disease.

He is also leading a meta-analysis (HERMES) consisting of the recent 7 positive trials published in NEJM. The first paper (Mayank as first author) was recently published in Lancet. The second paper analyzing the impact of time on outcome was recently published in JAMA (Mayank as co-first author). Dr. Goyal continues to push the boundaries of stroke research and is the Co-PI for a new trial (partially funded by CIHR) called ESCAPE-NA1 (testing the added usefulness of neuroprotection in addition to endovascular stroke therapy) and co-PI of a worldwide study of understanding variance of decision making in acute stroke (UNMASK EVT). Mayank enjoys teaching and successfully runs a yearly stroke course called 5T (where the 5Ts stand for: teamwork, transport, training, technique and technology).